BULLETIN: READ BELOW TO SEE HOW TO WIN A SIGNED BOOK BY APRIL!

Hello everyone,Today I am pleased to feature April Halprin Wayland for the second time in two weeks. Last Friday you read my interview with April (https://davidlharrison.wordpress.com/2010/08/13/april-halprin-wayland-today/ ) and let us know that you enjoyed it. I told you that when Kathy Temean returned from vacation we would post April’s picture and sample illustration. So here they are.

Today April is here with a poem, a challenge, and a reward. 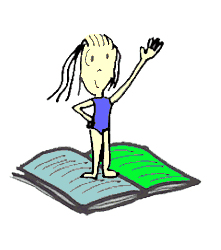 The poem is about Found Poems. Georgia Heard liked it and urged April to send it my way to post. I know this will tickle a lot of you because since the post on Found Poems went up on July 12 (https://davidlharrison.wordpress.com/2010/07/12/announcing-a-new-challenge/ ), it has generated tons of responses and it now ranks in the top two most popular dates in the one year history of this blog. The other, posted on Januray 9, 2010 (https://davidlharrison.wordpress.com/2010/01/09/discussing-childrens-poetry/ ), is a discussion of children’s poetry.
Without further ado, THE POEM.

IN THE WORD WOODS

I’m sure there’s a found poem somewhere here.
There usually is this time of year.

Didn’t a red-haired boy lose words
that were found last May by a flightless bird?And then that search and rescue hound
dug up sixteen poems he’d found.Listen for falling bulletin boards,
and scowling poem-poaching hordeswho stomp all over this hallowed ground
until the hidden poems are found.I’ll bring a flashlight, you bring a rake
we’ll get down on our knees and make

find a poem if they’re brave and follow
the hoot of an owl to the end of the hollow.

April invites comments to either her post last Friday or to her poem today. I’m to keep track of every name. We need a lot of names to make this challenge more sporting, because –here is THE REWARD:One week from today (August 27) I’ll collect all names, assign them numbers, put the numbers in a bowl, draw out a winner, and post that information. If you have a USA mailing address, April will sign a copy of her latest book with the name you designate and mail it to you.So how’s this for a triple whammy day? Thanks, April!David