Happy Father’s Day to you living dads and happy daddy memories to those whose dads are no longer around. Today I’m thinking about my own dad, John Alexander Harrison, signed his checks JAH, August 23, 1911-December 7, 1989. He was born in Springfield, lived in Springfield all but 4 1/2 years of his life, and died of cardiac arrest on a bedroom floor here in our house, twenty-nine steps from where I’m typing this. I sat on the floor beside him with my left arm under his neck to support his head until the paramedics came. He lived a while after they set to work, but he was gone before they got him to the hospital. Corneas donated from Dad’s eyes gave partial sight to two others. He would have liked that.

Here’s my father when he was a little boy, standing between his parents. William and Anna Harrison. The Harrison clan migrated from England to Canada and from there to Bad Ax, Michigan. Dr. Harrison was a veterinarian as were his father and brothers. Women in the family were nurses. Why my grandfather moved to Missouri isn’t known but he found and married a young woman named Anna Webb. When my father was 12, his dad died and left him to become the man of the household to help support his mother and two sisters. He stayed in school until he finished high school but soon entered the world of the worker by taking a job with the Gas and Electric Company, later to become City Utilities. He never told me if he’d had dreams of following in his father’s footsteps. It didn’t come up.

I don’t remember ever hearing my father complain. He accepted whatever life brought him and dealt with it the best way he knew how. People respected the man he became. They trusted him to say and do the right thing. He was scrupulously honest. To me he was a wonderful father, not the kissy-huggy kind, but I always knew he loved me. He built snowmen for me, taught me to fish, and instilled many of the characteristics that he modeled so well.

My parents, John and Neva, were a happy couple. If they fussed (they surely had spats like anyone else), I never knew it. I remember that one was a Democrat, the other a Republican, sees like Mom was the Republican, but I don’t remember for sure. I remember them talking about the war and the world scene but they didn’t pay a lot of attention to the day to day vaudeville in Washington. We attended church at Grace Methodist (where I would one day be married to Sandy) but I don’t remember talking religion among my parents’ friends. Dad served youth by being involved in DeMolay for more than thirty-five years. He was proud of that. He was a generous man who took Mom and me (and my sister when she came along much later) on long trips to see the country. I never knew how much Dad earned until I joined him to take over managing his concrete block manufacturing company when I was 36 years old. It was far less than I had supposed.

Sandy and I put flowers on my parents’ graves in Maplewood Cemetery on Memorial Day, same as always. We also decorated the graves of Sandy’s parents Kennon, my grandparents Harrison, my grandmother Justice (my mother’s mother), and two sets of aunts and uncles. My sister Jule doesn’t have a marker yet but will have. So life and death go on. Now and then I think about my family members who have left us. Sandy’s father Ralph was another fine man and needs his own special tribute. I’ve written about him before and have committed his memory to poetry more than once. But today it’s my father who is on my mind.

Thanks for everything, Dad. I miss you.

Yesterday Jeff spotted this large moth at rest above a doorway at the foot of a stairwell leading outside. We both took pictures but his turned out better so here it is.

You’re looking at a black witch moth which has a seven inch wingspan, the largest of any moth in North America.

One look at the moth and I was back in a bowling alley in Mexico City 66 years ago. We were staying in a large hotel (my parents and I) with a bowling alley on an upper floor. As Dad and I bowled a couple of games, I became distracted by the wings of countless insects flying against a window, summoned by the bright lights within. Some of the visitors were black witch moths, a new species for me then, and I couldn’t resist the temptation. I opened the window enough to reach out and catch two of the moths. In the process I allowed dozens of insects entrance to the bowling alley and immediately brought the manager on the run to close the window and let me know that windows were not to be opened at night.

It was not the first time I embarrassed my father with my need to add new specimens to my collection of butterflies and moths. A previous time was in front of a theater as we stood in line for tickets one evening. A freshly emerged polyphemus moth landed on the wall of the building a few feet above my head. I was six feet tall by then. It took some leaping but I managed to snag my trophy, which I held gently in my cupped hands throughout the movie so I wouldn’t smudge its beautiful scales. As I recall, I was much happier about the occasion than my dad, but to his credit he was his usual good sport about my habit of gathering trophies when and where I found them.

My thanks to Jeff as well as the black witch moth (which I left undisturbed above the doorway) for the flashback of loving memories of my dad that came as suddenly as beautiful moths through an open window.

REMINDER: Tomorrow is your last chance to win a free copy of A HATFUL OF DRAGONS. Tomorrow evening I will draw one name from the pool of those who have helped promote Vikram’s book and notify the folks who will mail out the book. Good luck!

One of my early memories is of my mother’s beautiful soprano voice. She hummed, whistled, and sang through her days as she went about her many activities as a fulltime mother and home maker. She sang in vocal duos, trios, quartets, glee clubs, and choirs. I learned to try my own voice and discovered the fun of singing too. On long trips down endless Arizona highways, Mom and I often sang together when we weren’t looking for animals in clouds. Dad drove while we entertained ourselves.

But now and then, always when least expected and always to my immense delight, Dad would burst out with his one and only musical accomplishment — the part chant/part song that follows. I know it’s a variation of the frog went a’courtin’ song, which has many versions, but I’ve never seen this one in print. Here it is, phonetically spelled and from memory stretched thinly over seven decades.

There you have it. And here is one of the sites you can visit for other versions. https://www.mamalisa.com/blog/the-many-versions-of-frog-went-a-courtin/

It was a long week but a good one, as long as I don’t count losing all those books from print. I think I’ll amuse myself — and hopefully you — by posting a few excerpts from books are will be no more. Here are the two opening pages from EARTHQUAKES: EARTH’S MIGHTIEST MOMENTS; Boyds Mills Press, 2004. The dedication read: In Memory of John Harrison.

In 1811, at two in the morning
just nine days before Christmas,
settlers in New Madrid, Missouri
all woke at once.
Their furniture was bouncing,
pots and pans flying.
Cabins shook.
Chimneys tumbled.
Roofs fell in.

Outside was worse.
Trees snapped in two.
The ground rolled.
Here and there it cracked open,
swallowed streams,
and squirted muddy water.
People hundreds of miles away
felt the shocks.
At that time it was
the worst earthquake
in our country’s history.

Again I’m sorry to be so slow in posting August’s Word of the Month: men Here’s my contribution.

I don’t remember if I’ve mentioned my grandfather William Harrison except in passing when talking about my dad, John Harrison. William was born in 1855 into a family that migrated from England to Canada to the United States, a family of boys who became veterinarians and girls who became nurses. Eventually he wound up in Missouri where he married Anna Webb and set up practice in Springfield.

He died at 65 when my father was nine years old. I possess three treasures that once belonged to my grandfather, a text book from his college days, a pair of delicate wire-framed glasses, and his pocket watch. I never tire of looking at them. I wonder what I would have called this man had I known him in person when I was a little boy. Grandfather? Granddad? Granddaddy? Papa? Since I get to choose now, I’ll call him Granddad. This poem is about my granddad.

Pale moon framed in gold,
metallic blue hands
delicate as architect arrows
aimed precisely at hour and minute.
Where 6 should be, a miniature hand
points to seconds ringed around its rim.

E. Howard of Boston made this watch
that Granddad carried —
on a chain no doubt –
one end fastened to his belt
so he wouldn’t lose it
on a dairy barn floor.

I imagine him,
his bad leg bent slightly,
one hand resting on someone’s cow.
Gold-rimmed spectacles perch on his nose,
E. Howard of Boston faithfully marking
the passing of his abbreviated life. 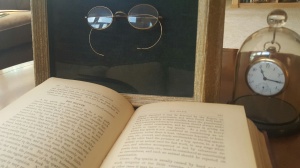 A book, glasses, and watch – all I have
of the grandfather I never knew,
personal objects handed down
from him to my father to me,
three generations of men
connected by past and present.

Today I get up the nerve.
For the first time in all these years
I twist the winding stem a few clicks,
wondering if it will snap off in my fingers.
The second hand starts
like a light sleeper startled awake
by the sound of tinny ticking. 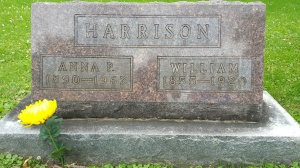 I press the watch to my ear.
Its voice speaks to me
as it once spoke to him.
I smile at Granddad,
one hundred years removed.
I smile knowing I can summon him again,
visit him as he makes his rounds.