Day One of the week went just fine. Got a lot done and also learned that the upcoming volume of SOMETHING ABOUT THE AUTHOR, which includes an updated article about me, is due out October 6. Today has a break in it but I’m ready for a good solid block of writing all morning and well into the afternoon.

Okay, here’s some news. My work has been sandblasted into a sidewalk and painted on a bookmobile, but it has never been a tattoo before. A good friend of mine, Mary Cosker, plans to have the original Piggy tattooed in January. Mary teaches junior and senior English at Pioneer Career and Technology Center in Shelby, Ohio. Her early memories of my story were when she was growing up on a dairy farm in Jeromesville.

Does anyone remember PIGGY WIGLET AND THE GREAT ADVENTURE?

Technically my work isn’t involved. It’s that wonderful illustration created by Les Gray back in 1973. Les also illustrated Larry Brimner’s great story of MAX AND FELIX. But I’m taking credit anyway because it was my story that meant a lot to Mary and her sisters when they were girls around their grandmother’s knees, listening to the great adventure of a pig who set out to catch the sun.

In January I will feature Mary and ask her to tell her story about those times that remain so vivid today. It’s a moving example of how books can have such powerful, lasting influences on children, especially when they are lucky enough to have a loving adult read to them.

Here’s the latest on one of my old favorites, PIGGY WIGLET,

originally published by Golden Books in 1973 and brought back to the market by Boyds Mills Press in 2007. 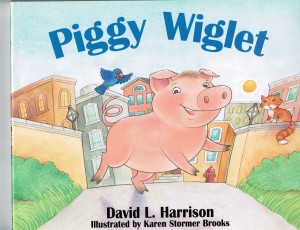 I first heard from Mary Schweyer, a fan of PIGGY WIGLET, in 1995. She wrote one of the loveliest letters I’ve ever received to tell me why my storybook held such good memories for her. She and her sisters, Laurie, Sally, Debbie, and Becky, used to gather around their grandmother while she read the story about the runaway pig that chased the sun. I posted about this on January 18, 2014. Here’s a picture of the five women holding copies of the book. https://davidlharrison.files.wordpress.com/2014/01/5-women-holding-piggy-wiglet2.pdf

I haven’t corresponded with Mary’s sisters so Mary, if you see this, please tell everyone hello. Mary is married now and her last name is Cosker. She told me recently that as a teacher at a vocational school in Ohio she has read the book and given the back story to students 16 and 17 years old and that the diesel and auto mechanic students liked it best. w00t w00t for those kids!

What brought all these pleasant thoughts back to mind was a note from Mary two days ago. A friend found in a thrift store a framed print of THE HAY WAIN (1821), one of John Constable’s well known paintings, and painted Piggy Wiglet and the Ghostbusters on it. Mary sent a picture and here it is. 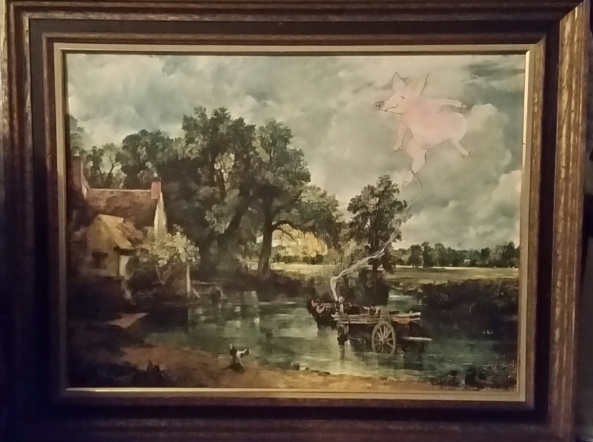 She’s going to hang this in her living room. And what more could an author possibly ask! With all due respect to the marvelous Mr. Constable, I’m delighted. Mary, thank you!