If I’ve posted this one before, it has been a while. In 1979, Drury honored Sandy with a “Distinguished Alumni Award.” Three such awards were presented at a large dinner celebration. Each recipient was introduced by a speaker, who was given three minutes. Each recipient was allowed five minutes to give his/her acceptance remarks. Eight minutes times three equals twenty-four minutes plus trips to and from the microphone. Very nice program.

In 1981, I received the same award, and the rules hadn’t changed. Twenty-four minutes, shuffle shuffle, and home early enough to watch the news.

In 1982, from a sense of duty, we attended the banquet and took seats toward the back of the room. When award time arrived, the first introducer spoke for fifteen minutes about the endless merits of his champion. Said champ expressed his gratitude in a few well chosen words that went on more than twenty minutes. Ditto the second duo. Ditto the third. I had plenty of time to wish I had stopped after two cups of coffee and skipped the water. President John Moore, stuck on stage like a pinned butterfly, did a remarkable job of looking engaged, but I harbored suspicions that his thoughts might be elsewhere.

To while away the light-years, I started making up a poem in my head. Later, much later, at home I drafted what I had, and in the next day or so I sent the finished poem to Dr. Moore. Here it is, told as though borrowed from the thoughts of the good Dr. Moore himself.

We gave the floor
To this crushing bore
And asked him to address us.
Long ago his time was gone
Yet he blathers on and on
Determined to impress us.

My hair was brown
When I sat down
To hear this bilious blow.
Now it’s gray and I’ve no doubt
That which hasn’t withered out
Is turning white as snow.

My beard was spare
When I took a chair
To listen to him spew.
Now it’s curling in my lap,
Everybody craves a nap,
God I need one too.

Panic and pain
Are pleadingly plain
On all these tortured faces.
So much water, coffee, tea —
Every soul has got to pee!
Still the loony races.

I dream about
Just slipping out,
I yearn with all my might.
But I run the risk of looking rude
And even though the speaker’s crude
Two rudes don’t make a right.

If I survive
This night alive,
If I don’t die from boredom,
No more tales by gassy men
Of super feats, amazing kin,
And the thousands who’ve adored ‘em!

Dr. Moore had the poem framed. He named me Drury’s Poet Laureate. And he changed the rules for future Alumni Awards banquets. For the next several years, recipients were introduced my masters of ceremonies and invited to stand and wave from their seats. These days winners are introduced briefly by chosen representatives and then given a very short time to offer their thanks. Don’t tell me poetry doesn’t have the power to change history! 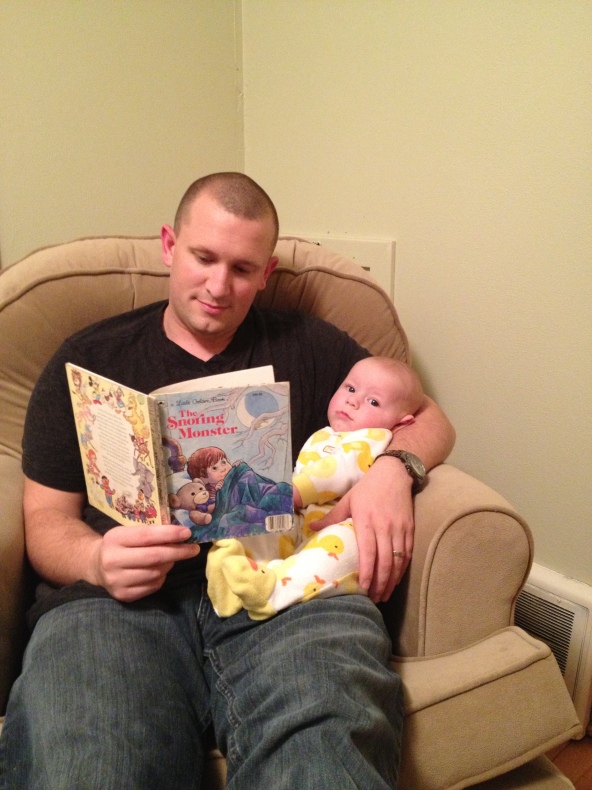 I’ve talked in the past about one of my projects as poet laureate for Drury University — Family Voices — which I co-chaired with Laurie Edmondson, a professor in the School of Education and Early Childhood Development. 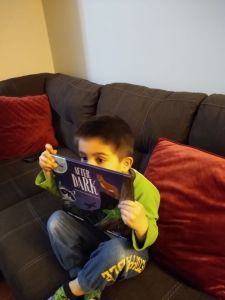 For a number of years our committee steered a community-wide appeal to parents of children from birth to five to read to their kids on a regular basis. During those first sixty months of life the human brain is hungry for information and absorbs life’s lessons at a pace never to be matched during the rest of the lifetime.

When we eventually brought an end to the project, Laurie set up a site where we might continue to remind parents long after our major activities were over. https://www.facebook.com/ozarksfamilyvoices

Now and then I post something on the site. A number of people have discovered its presence and follow it. I don’t think of myself as a nag, exactly. I see myself as a friendly but passionate advocate for early childhood literacy. I’ve learned that a good photograph helps draw readers to the site so I often insert one from my own files of fans reading one of my books to their children. Altogether flattering, but I often feel awkward using them because it look too self serving.

I’m wondering if any of you might be willing to send me pictures of you or someone you know reading to a child in the 0-5 range with permission for me to post it on the Family Voices site. I would prefer that the books not be mine. There is no schedule for using these pictures. I sometimes go weeks between posting anything new. Other members of the committee are always encouraged to add thoughts of their own. There is only one purpose for this effort so anything that promotes it is appreciated. 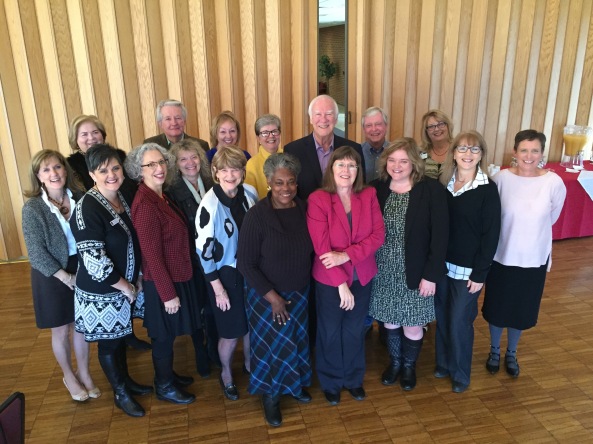 If you haven’t heard the news, J. Patrick Lewis has been named by Poetry Foundation as its new Children’s Poet Laureate. The post lasts two years. Pat is the third poet to be so honored and follows Jack Prelutsky and Mary Ann Hoberman. Here’s the link to read a most insightful interview of Pat by Sylvia Vardell. http://www.poetryfoundation.org/children/article/242020 .

I hope you will read the interview and remember to send Pat well earned congratulations.  Don’t forget that Pat also serves as one of the judges for Word of the Month Poetry Challenge.

Speaking of which, we haven’t seen anything yet this month from students! With end of school year activities looming, teachers don’t have much time this month. But I remain optimistic that at least a few steadfast young poets will come through.

Yesterday I had cataract surgery. This morning the patch comes off so I’ll see what I shall see.

BULLETIN: Today is the last day to vote for the August Hall of Fame Poet!! If you haven’t done so yet, be sure to pick your choice and vote before 10:00 p.m. EST. Go to this link, https://davidlharrison.wordpress.com/2010/08/28/let-the-voting-begin-7/, click in the circle by your choice, and click on vote at the bottom of the box. If you want to reread the poems, they’re listed below the ballot box.

I’m involved in a project to stimulate parents to read more often to their preschool children. We’re in the process of recording voices of area celebrity readers to create a library of good books read on a CD. When we’re finished, we’ll add the voices of parents to personalize each CD, then give it and a free book to the family. Here’s an article that appeared in Springfield News-Leader last week.

Sound radical? It is in many homes.

Only 54 percent of our nation’s children under age 5 are read to at home on a regular basis. That drops to 36 percent in families living at the poverty level; 31 percent when neither parent is a high school graduate.

That’s like withholding tools a child needs for a good life. Literature’s words through stories build a child’s language skills, and kids who are good with language are more likely to succeed in school. Poor readers at the end of first grade are likely to remain poor readers after fourth grade, and become prime candidates for dropping out of school.

Family Voices is an effort to make more parents aware of the positive long-term effects of reading daily to their preschool children. Beginning this fall with a trial effort at Boyd and McGregor elementary schools, project volunteers will record parents reading to their preschool children. Age-appropriate books will be selected by children’s librarians and provided at the recording session.

The parents’ voices will be preserved on a CD along with the voices of more than a dozen community leaders reading more stories. The result will be a treasury of more than one hour of stories for young children, read by adults who want kids to grow up loving books and literacy.

Each participating family will receive the CD that includes their own voices, and one free book for each child under age 5 in the family. Even when a parent is unavailable to read to a child, the CD will provide opportunities to listen to good stories read well, and help the child develop a love for books and the magic of words.

Announcement: At Drury University they’re building a page for me on the School of Education and Child Development website. I’ve been working to help establish a job description and to create activities I can do in my role there.  I now have an office — #303 — in Lay Hall on campus. Here’s the link. Let me know if you have ideas or suggestions. Thanks! http://www.drury.edu/multinl/story.cfm?ID=24824&NLID=145

So far this month our numbers are off — must be summer, huh? — but the quality of our itching is beyond compare! My thanks to you busy poets who have found time to contribute to July’s great scracth-off. For you slackers who are having too much fun to take up the challenge yet, you still have plenty of time. I won’t cut off this month’s entries until Monday, July 26, at 10:00 p.m. For now, here’s who and what we have to date. If you haven’t read our poets’ efforts yet, click on the Adult W.O.M. Poems and Young Poet W.O.M. Poems boxes above this post.

Here are the adult poems:

And here is our lone — but lively! — young poet poem so far:

Thanks to Ken Slesarik’s Guest Reader appearance last week we were joined by several new visitors from Arizona. I hope you folks in the hot west (where I once lived) will share your own brand of itching.
And thanks to Carol-Ann Hoyte’s recent Guest Reader appearance, we also welcomed a number of readers and writers from Canada. Do folks in your area have itch poems to share? I hope so!