Yesterday I learned from Jaynie Chowning that the founders of the original Ozark Mountain Daredevils — Randle Chowning and Larry Lee, joined by David Wilson, are doing an acoustic show on May 6th at the Fox Theatre on the Springfield square. Tickets are available at Kaleidoscope or online at https://417tix.com/events/lee-chowning-wilson-concert.

I interviewed Randle and Larry a while back when they were inducted into Writers Hall of Fame. They’re not only gifted, famous song writers and musicians, but also good people. I hope they get the big turnout they deserve on May 6. I would suggest getting tickets right away. They will probably go quickly.

A few weeks ago I mentioned what a pleasure it was to interview Randle Chowning and Larry Lee for a video to be aired by Writers Hall of Fame as part of the build up to their induction this year. Board president Kim Flores just released this press notice.

Veteran songwriters, Randle Chowning and Larry Lee to receive the 2015 Quill Award on March 14
The public is invited to a gala dinner Saturday, March 14, at the Tower Club in Springfield when Writers Hall of Fame honors inductees Randle Chowning and Larry Lee, songwriters and founding members of the Ozark Mountain Daredevils, with the annual Quill Award.
The event begins with a social hour and silent auction at 6 p.m. at the Tower Club, 901 St. Louis St. Dinner will be served at 7 p.m., followed by the presentation of the Quill Award. The evening will conclude with a live auction. Proceeds from the auctions fund Writers Hall of Fame college scholarships for high school seniors.
Tickets to the dinner gala are $35 per person and can be reserved by calling Kathy McQueen at 417-368-1231, or order tickets online through Brown Paper Tickets at http://www.quillawards2015.bpt.me. Reservations requested by March 7. The Writers Hall of Fame can accept only check or cash for auction items.
Chowning and Lee had commercial success with Ozark Mountain Daredevils and individually as Nashville songwriters. Their most recent collaboration is the band Beyond Reach.
The Writers Hall of Fame is a not-for-profit organization that encourages writers of all ages. Proceeds from various events fund college scholarships for talented high school seniors and recognizes students in grades 5 through 12 for their writing skills.
To fulfill its mission, the volunteer board of directors each year selects a Missouri professional writer to receive the Quill Award for making significant contributions to the written word. Past Quill Award recipients include young adult authors Sandy Asher and Kate Klise; producer Linda Bloodworth-Thomason; children’s author and poet David Harrison, songwriter Johnny Mullins and novelists Daniel Woodrell and Ridley Pearson.

and Larry Lee to interview them for a 45-minute video.

Kim Flores, president of Writers Hall of Fame, facilitated the meeting and Cina Canada took care of lights and recording and will now edit the result.

Chowning and Lee are the 2015 Writers Hall of Fame honorees and will be inducted at the Quill Award ceremony on March 14. They are only the second double winners in our history and the first musicians to be inducted. Both men grew up playing in bands, often their own, and formed the Ozark Mountain Daredevils when in their twenties. They are popular, successful, and widely known for their songs and musicianship. 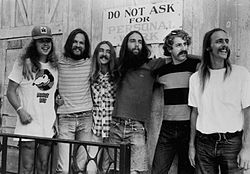 “If You Wanna Get to Heaven,” written by Steve Cash and John Dillon, was produced in 1973 and hit the top 30 chart. Randle was involved in the creation of the song and played lead guitar and sang the lead vocal.

Two years later Lee wrote “Jackie Blue,” which soared to #3. Both musicians eventually migrated to Nashville where they worked solo and with a number of established groups for more than ten years before returning to the Springfield area.

Larry and Randle are articulate and humble about their successes and fans will love what they had to say during our interview. It was my privilege to meet them in the Midtown studio and I look forward to sharing the results with as wide an audience as possible.