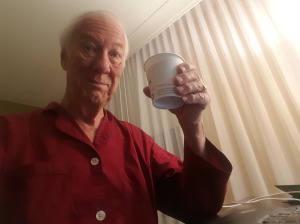 Today is my 3,519th post on this blog spot that Kathy Temean created for me in 2009. Bill Johnson at Highlight and others had urged me to get a website so I looked around for designers. The first note I sent to friends for recommendations was Ralph Fletcher. He, Ruth Culham, Rebecca Dotlich, Eileen Spinelli, and others gave me names and tips, and I eventually wound up going with Kathy. When Kathy completed my website, she said I needed a blog. I fought against it, lost, and here I sit, 3,519 posts later, saying for the 3,519th time, “Hi everyone.”

Today I look forward to a Zoom meeting with Kathleen O’Dell (Public Relations Director) and Stephanie Smallwood (acting Director of Children’s Services) at Springfield-Greene County Public Libraries to discuss what I’d like to do for a summer reading project with the district. I hope to do one or more videos providing tips about reading and writing poetry for the summer reading program. Perhaps I can use the videos for other programs elsewhere. I’m eager for the visit.

Yesterday, thanks to the expert direction of Marjorie Bicknell, Philadelphia Regional Rep for Dramatists Guild of America, Sandy Asher and I presenting our reading of JESSE AND GRACE. It was the first time a children’s work has been presented in the Footlights series. We drew a record number of registrations, for which we were grateful. For those of you who watched the performance, thank you! The event was recorded so before long we’ll be able to share it with teachers, librarians, and others who might be interested. More about that soon.

For Christmas Jeff and Jennifer gave me a steel utility cart, just the thing to cut down on my trips each spring and winter carrying more than three dozen chair cushions, umbrellas, pots and planters, bird baths, concrete pottery, metal sculptures, etc. to and from the patio and garage. Here’s my new beauty.

Ruth Culham says I need a name for my wagon and I got a C- in Wagon Naming for Dummies when I was in school. I would appreciate any suggestions you might have to help me make Ruth happy. After all, she’s a good friend and I don’t want to start 2017 hurting anyone’s feelings.

My friend Ruth Culham has written many fine books but one of my favorites is THE WRITING THIEF. It’s about how we improve our own writing by paying attention to the excellent writing of others. Ruth says, “I am always on the hunt for mentor texts, and because I’m a reader and a writer, I find great stuff.” Then she gives us a brilliant book filled with examples and narrative about how to profit from the expertise of the best writers out there.

At the moment I’m rereading SHADOWS OF FORGOTTEN ANCESTORS, A SEARCH FOR WHO WE ARE, a book by astrophysicist Carl Sagan and his wife Ann Druyan, a novelist and Secretary of the Federation of American Scientists. You don’t know who wrote what because they both write prose at the highest level. But I want to share an example of my “theft” and ask you to post some of your own examples of prose by others that have made you sit back and say, “Wow!”

Here is the Sagon/Druyan voice explaining the difficulties of organic forms dealing with oxygen, on page 121-122. “Now oxygen is a peculiar molecule. We breath it, depend on it, die without it, and so naturally have a good opinion of it. . . . But as a blazing log or a burning coal reminds us, oxygen is dangerous. Given a little encouragement, it can vandalize the intricate, painstakingly evolved structure of organic matter . . . . Oxygen is a poison for organic molecules and doubtless was poisonous to the beings of the ancient Earth. . . . . Either you adapted to the oxygen, or you hid from it, or you died. Many died. Some reconciled themselves to live underground, or in marine muds, or in other environments where the deadly oxygen could not reach.”

Their subject here is usually presented straight forwardly as so many facts. But Sagan/Druyan bothered to give us a lesson on how facts can be brought to life, how something that happened in the mists of ancient time can seem relevant, understandable, and worth reading about.

The floor is open. Who has inspired you? 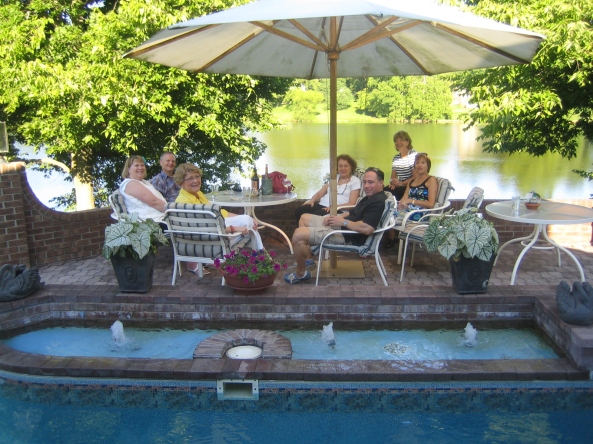 As you know from my whining lately, I’ve been filing and recording. This inevitably leads to leaping down rabbit holes and coming up an hour later wondering where the time went. One such side trip resulted in rediscovering this picture. In 2009 we held a conference in Springfield that I dubbed Pie in the Sky. After a day’s work the speakers assembled at our house for a meal and refreshments. It was a great experience and beneficial to area teachers who would normally have to attend a national conference to meet and learn from these headliners. They are, from left to right, Ruth Culham, Lester Laminack, Aileen Wheaton, Laura Robb, Evan Robb, Sandy, and Mary Jo Fresch.

Good times and good memories. There is something to be said for filing after all!

BULLETIN: Linda Baie tried to leave a comment on the IRA site and said it’s not working. Each time you type in the code, it’s rejected. I just tried twice and had the same results. I sent a note to the editor and hopefully the problem will be cleared up soon. I’ll let you know when it is. Thanks for your patience.

Remember when I got shut out of the Google Hangout with Ruth Culham, Kate Messner, Lisa Yee, and Varian Johnson? The link I was provided would not work that evening even though it had worked the night before when we rehearsed. I gave up trying when there were only 15 minutes left in the program. Next day I was invited to post my own list of suggested mentor texts on the IRA blog, so I did. And now it’s posted. If you’re interested, here’s the link.
http://www.reading.org/reading-today/ira/post/news/2014/11/13/a-waylaid-panelist-shares-his-mentor-texts