Last night Sandy and I loved the performance of Brigadoon at Springfield Symphony’s Pops Concert. BFA students in Music and Dance at Missouri State University gave stirring performances, all accompanied by our great orchestra. There were few empty seats in the house at Juanita K. Hammons Theater for the Performing Arts. What a beautiful venue.

For no particular reason I wound up wearing black for the evening. It wasn’t really Johnny Cash sort of music, but Sandy didn’t urge me to change clothes so I got out of the house like this. After the concert we went to Houlihan’s for a late meal. We got there at 11:01. The kitchen closed at 11:00. We had drinks, went home, and snacked on cheese and crackers before calling it a night. 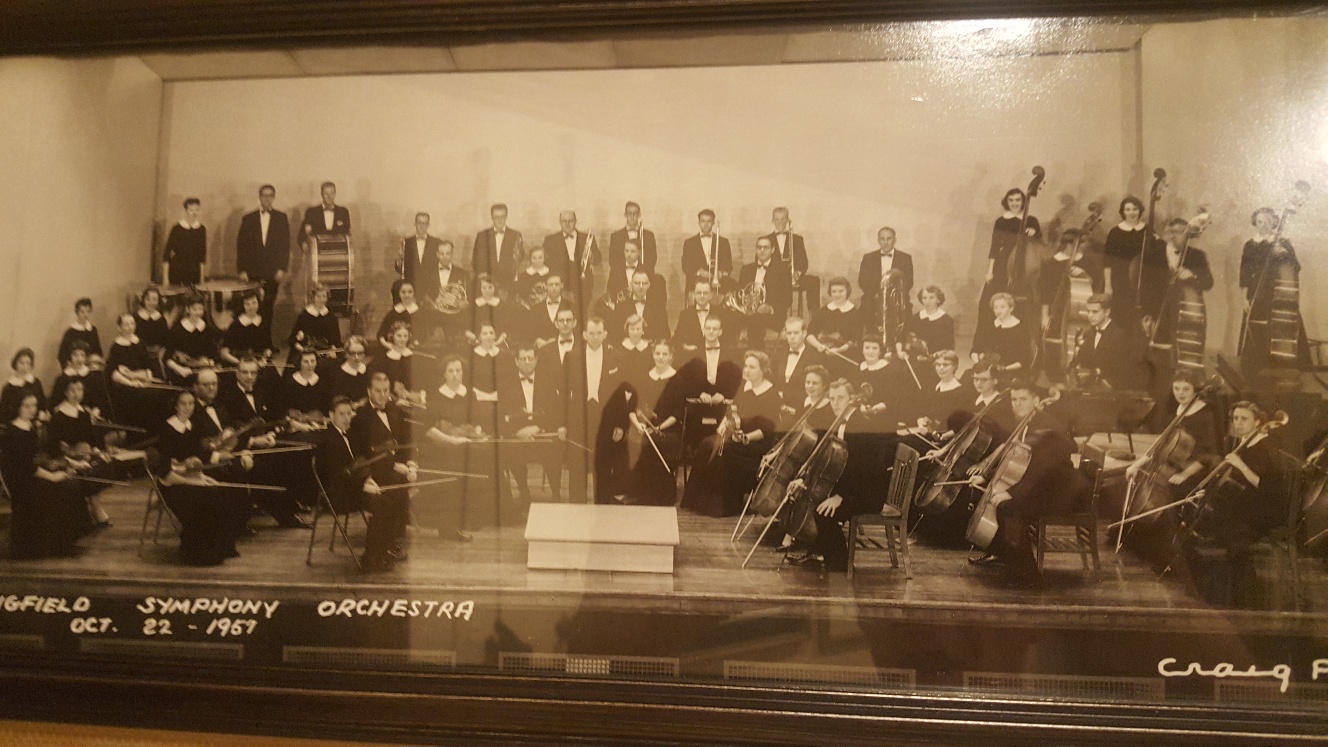 My friends, Jim and Mary Alice Shannon, posted these pictures yesterday. They were taken of the Springfield Symphony Orchestra in 1957.The conductor was Chester Moffatt. He was also head of the music department for Springfield Public Schools. He was a trombonist and became my teacher when my parents gave me a trombone for my 10th Christmas. I loved the instrument and was soon practicing an hour or more each day. When I was sixteen, I began private lessons of my own. In high school I became the music librarian for the band and orchestra, which meant that I kept all music folders stocked with the correct sheet music depending on the selections Mr. Moffatt chose to work on. I was president of the band and drum major for the marching band. During those years I was playing, beside Jim, in the house band on Saturday nights at a night club called Half a Hill, less than half a mile from where I now live.

Here’s a close up. I’m the tall one with the pompadour and horn rimmed glasses in the center of the back row. By the time this picture was taken, I was 20 years old and had spent a summer playing in the house band at a club in Springfield, Illinois. I was principal trombonist in the Symphony for another year after this picture was taken. Jim went on to a life of music, teaching and playing. He still plays. For me it was off to Emory University for graduate work and my days of playing my trombone were over. I still have the horn in a closet as a reminder of another time, another life.

Saturday night Sandy and I went to the Springfield Symphony to hear a guest appearance by Gene Pokorny, principal tuba player for the Chicago Symphony since 1989. During the course of his performance of CONCERTO FOR TUBA AND ORCHESTRA and BLUE BELLS OF SCOTLAND, Pokorny did things that no normal tuba would ever aspire to. Our friends, Dr. Yates and Mrs. Janet Trotter made Pokorny’s appearance possible. We’re grateful.

Sandy landed us tickets in the second row so we could watch the guest artist’s artistry up close, a real boon. As I watched the faces of the musicians, I was reminded of those days in my early life when I, too, was privileged to sit in the symphony. I was selected when I was in high school and became principal trombonist before I was twenty. Those memories mean a lot to me. I have a picture hanging on my office wall. Here’s a picture of it. It didn’t turn out well but that’s me with my brown hair sticking up, in the center of the back row. My longtime friend Jim Shannon is on my left. He and I were friends and rivals for first chair from junior high school on. Jim went on to a distinguished career as a musician and teacher and we remain in touch.

We rehearsed on Tuesday nights. As I recall we were paid $1.25 per rehearsal and $2.50 per concert. I could be wrong. Maybe it was $2.50 and $7.50. Anyway, not much. Jim, if you read this and remember what we were paid, I hope you’ll join in. The point of being a musician is rarely about money. It’s about the joy of being good at something, surrounded by others who are good too. Last night made me want to go the closet, get my horn out of its case, and just hold it for a while. The chops are long gone. But not the memories.