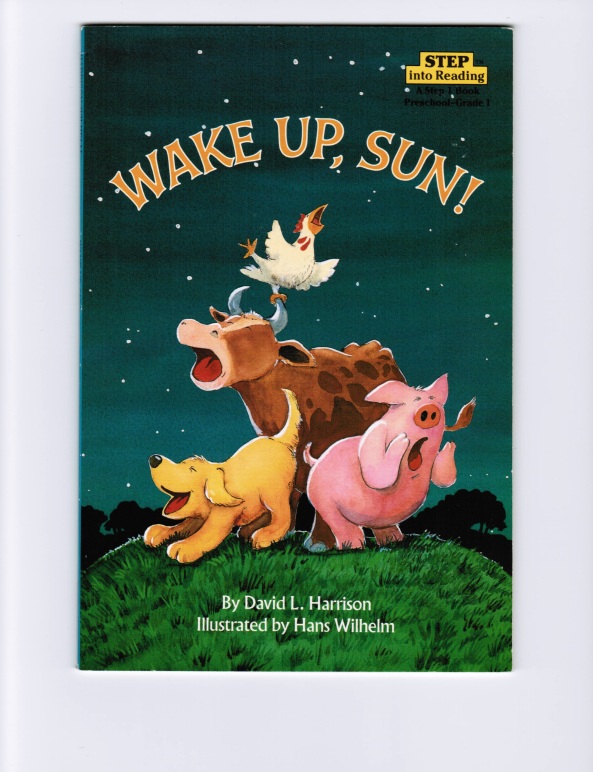 WAKE UP, SUN! is a Step Into Reading book. I’ve often said that during the six years I served on the Springfield, Missouri school board (1982-88) I only produced one work that was worth keeping, this one.

The first customer review that appeared on Amazon.com was by a parent who strongly objected about the farmer firing his shotgun into the air to frighten away what he thought was a fox in the henhouse. Here’s the comment. “If you don’t like to see guns pop up unexpectedly in children’s books then don’t buy this one. I was thoroughly disappointed to see a gun come into play towards the end of what was, until that point, a nice story.”

That set off a bit of a tempest in a teapot with such stalwart defenders of my story as this: “Farmer never actually fired the gun AT anything. Look at where he is pointing the barrel. To the sky. It was a scare tactic…and that was all. Let’s move into the real world people.” My favorite: “Guns don’t kill people. Malevolent cows with pitchforks kill people.”

WAKE UP, SUN! was illustrated by Hans Wilhelm and published in 1986. It just went into its 70th printing. Sales passed 1,000,000 copies quite a while back. Now and then my M.O.W. tells me I should write another story like WAKE UP, SUN! Yeah, right. I’m trying, lady.