Yesterday Cory Corrado, our good friend in Canada, posted a poem inspired by this month’s Word of the Month Poetry Challenge word — celebrate. She added that she began writing W.O.M. poems in October 2009 and this new one is her 109th poem “that would not be if not for this challenge.”

It began with a word
One four letter word.
No! Not a “dirty” word―
An earthy, ‘clean” word.
A wholesome down to earth word
An inelegant word
A curt matter of fact word
A no-nonsense-straight-shooting, tell-it-like-it-is word
A “soiled” word.

You guessed it!
The ‘face’ that launched thousands.
YESSS! Thousands . . . more priceless than ships.

Seems like yesterday . . .
And it all began
with some very fertile
D-I-R-T

And I thank you, Cory. We met at my first Highlights Foundation poetry workshop in 2011. I love the picture of you on a swing in the yard of the farmhouse where we held the workshop. That was a great group. We’re still in touch with Jeanne Poland, Ken Slesarik, and Joy Acey. 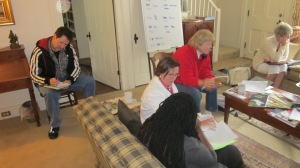 I did five poetry workshops in Honesdale, most recently in 2016, and appeared as a Skype guest for Larry Brimner in 2015. I occasionally wonder if I should offer another one, but my friends, Georgia Heard and Rebecca Dotlich, do a stellar job each year and I doubt that two poetry workshops are needed. I’m glad for the ones I did, though, and have many great friends and memories to treasure.

Here’s my Word of the Month poem inspired by our word: ZONE. I hope to see a lot more poems before the end of the month. So far we have eight thanks to Cory Corrado, Jeanne Poland, Bryn Strudwick, Jane Yolen, William Joe Pyles, Robert Schechler, Elizabeth Neubauer,, and Jane Heitman Healy.

Together down the road we go.
Where we’re going we don’t know.
Most prefer it nice and slow.
Some are in a hurry though.

Those who like a slower gait
Have no sense of running late.
If now and then they pause to wait,
The fun of getting there is great.

For others slowpokes make them groan.
Winning is all they’ve ever known.
To get there fast and first, alone,
They live inside the passing zone.

Together down the road we go.
Where we’re going we don’t know.
Most prefer it nice and slow.
Some are in a hurry though.

I choose this month’s word challenge with confidence that I won’t screw up and name a word used previously. Know why? Because of Cory Corrado, that’s why! 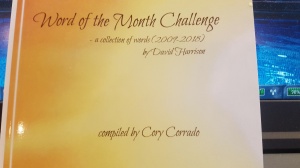 Just look at the lovely gift she has sent me, a booklet listing every word I’ve used since the beginning in 2009. They’re listed alphabetically! And she included a printout of all words by month and year, in which it’s apparent that on five occasions I have indeed reused a word.

So here is the all new, never ever used before Word of the Month word for July! It is FRESH.

Go for it, ladies and gentlemen!

Cory Corrado, do you still keep track of the words we’ve used over the years? You updated me a while back but once again I’ve failed to keep my list current. You are our only hope!!

I’m thinking we haven’t used SOUR yet. Unless you catch me repeating myself, let’s see what all you poets can create this month with a sour inspiration.

For some reason the word for May — MOUSE — isn’t resonating with many of you. Through this morning we’ve had only five poems, counting mine, posted all month.

Interestingly, of the four other poets, Cory Corrado, Jeanne Poland, Bryn Strudwick, and Jane Yolen, three countries are represented, four if you count the time Jane spends in Scotland. Also, Susan Hutchens posted a mouse poem that I overlooked earlier.

Have I missed anyone? Sing out if you posted on a regular post rather than on Adult “W.O.M.” Poems because I might have missed you. Otherwise, let’s see more mouse-inspired poems, people! Squeak up!