Here’s my CLASS poem. Keep those new ones coming!

THANKS CARL
by David L. Harrison

Nomenclature poem,
thanks to Carl Linnaeus,
Swedish born, who
put us in our places
like name tags for guests
at a party.

The rat and us
he placed together
up to a point:
Kingdom
Phylum
Class

Beyond Class,
as Carl knew,
we differ.

So it goes with rutabaga,
rose, turtle,
butterfly . . .

Good to know which
drawer is ours
in the filing cabinet of life
so we don’t burrow, slither, howl

REMINDER: Voted yet for January Hall of Fame Poets? You have until Tuesday night at 10:00 CST.

My thanks again to Carole Adler for being such a lovely Featured Guest this past Thursday and Friday. Carole, I appreciate you!

I’m back. Last week ended a marathon. Over an eight day period I wrote nineteen episodes of the planned podcast series, This Week with David Harrison, and on Saturday I was in a studio from 9:00 – 5:00 where we shot them all. The producer now has eight weeks to complete all the post production work so we can be ready to go by spring break. Those of you involved in education can look for marketing efforts to begin then.

Now I can get back on task, beginning with the process of catching up. Tomorrow I’ll post my lead off response to a new topic on WRITERS AT WORK. I hope you’ll join us for that. And plan to meet my Featured Guest this week when I introduce Ruth Culham on Thursday and present her picture and article on Friday.

Between now and then I’ll be working on something good for Wednesday. For now, here’s a poem I wrote recently after spending quite a while observing a bald eagle on our lake looking like it was Monday for sure.

The bald eagle stands flatfooted on the ice.
In narrow channels around it
a dozen coots bob
like deli luncheon specials.

Lethargically the eagle stares,
turns its head,
bored with the menu.

Time to get going.
Grab a bite first?
Can’t decide,
not really hungry.

Sometimes we write in hospital rooms. Here’s my contribution for the month. If you haven’t posted your poem yet, don’t let the time slip by. For those of you who have, forgive me for not commenting yet. I will!

Orange-clad my morning news
slaps the drive, sleds wet concrete,
skids half-buried in a spray
of orange-red leaves
beneath my cherry tree.

What I read: During the night,
a train derailed in Maryland.
A clerk was shot in Utah.
The president took a trip.
Not reported: Small white moths,
tricked by balmy weather,
emerged to an early doom,
sought safety (futilely)
around my neighbor’s light.

Tugboats nursed to port a ship-load
of angry waving passengers.
Unnoticed: Festive cherry leaves
relinquished umbilical grips,
drifted in the dark on a slant
toward their destiny

where, scattered like Thanksgiving doilies,
they cover steps a opossum took,
sniffing for woolly worms,
mouse-bits dribbled by owls,
a weed-slug-toadstool salad.

High-backed, nose to the ground,
a raccoon paid scant attention
to the opossum, none to the plight
of Haitians perishing from cholera.

Likewise a buck muzzled the air,
jittery for love regardless of who —
eventually – is elected in Alaska.

It occurs to me, stooping to my news,
this isn’t,
really,
the whole story. 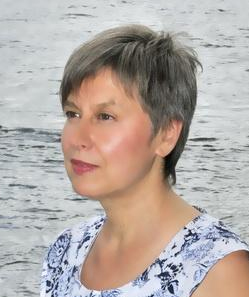 Nancy Gow from Montreal is my seventh poet to be featured during the Summer Guest Reader Series. My thanks to Nancy for sending us her picture and a poem to enjoy. Actually, she sent three poems and let me choose one; a hard choice!Nancy shares exciting news! Her first rhyming picture book, Ten Big Toes and a Prince’s Nose, will be coming out with Sterling Publishing in October. Congratulations to Nancy and to Sterling. Her editor at Sterling says that Nancy is great to work with.

To learn more about Nancy: http://www.nancygow.com

A Hippo Ate My Hotdog
by Nancy Gow

A hippo ate my hotdog.
I bought it at the zoo.
I loaded it with ketchup
and lots of onions, too.

I left it on a table
and went to get a drink.
When hippos smell a hotdog
they move faster than you’d think!