With all the cancellations of children’s literature festivals, we might want to think about alternative ways to reach kids when they cannot attend an event in person. In 2007 I had written CAVE DETECTIVES, UNRAVELING THE MYSTERIES OF AN ICE AGE CAVE, and was looking for ways to introduce young people to the world of caves — Riverbluff Cave in Springfield specifically.

Thanks to my visionary friend, Annie Busch, who was then head of the Springfield-Greene County Library District, I was introduced to Bill Giddings, at MOREnet, the state’s provider of Internet connectivity to educational organizations. A collaboration was formed to get a fiber optic cable system run into the cave. It involved the cooperation of the library district, Ozarks Technical Community College, Missouri State University, Greene County Commission, the City of Springfield, and the Springfield-Greene County Parks Department.

The evening of the event Matt Forir, the paleontologist who led the explorations of Riverbluff Cave, was positioned inside the cave. These pictures show a group of us after spending eight hours in the cave. I moderated the program from an auditorium in The Library Center. Viewers could see and hear us both as we visited back and forth and Matt answered questions I passed along to him as they were emailed in.

That evening we had viewers in North Dakota, Arkansas, Arizona, California, Georgia, Iowa, Kansas, Missouri, Nebraska, Oklahoma, and South Dakota over 200 separate video-streaming connections. I’ve forgotten how many students were involved but it was a big number. As the library’s Community Relations Director Jeanne Duffey reported in her column afterward, “Students were able to ask questions and experience the excitement of getting as close as you can to being there without placing a foot in the fragile cave.”

Technology may have moved a few light years beyond what it was in 2007. So how now, when the chips are down, do we reach out to kids wherever they may be and involve them in fun activities like the one we had in 2007?

I have a feeling I’m about to get an education from some of you. So bring it on. 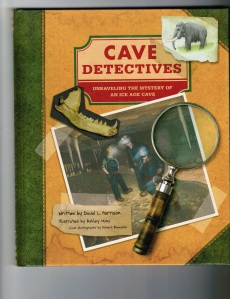 CAVE DETECTIVES is the true story of how a cave that came to be called Riverbluff Cave was discovered by a road crew on September 11, 2001. The cave contains the oldest ice age fossils ever found on the North American continent. When the book was published, it became a Junior Library Guild Selection. In 2013 it was selected by the Springfield Missouri Park Board to be one of the items most representative of the Ozark region to be placed in a 100-year time capsule as part of the Centennial Celebration of park system.

Yesterday I received a query seeking permission to reprint a passage from one of my nonfiction books, CAVE DETECTIVES. If we can agree on terms, the excerpt will appear in a free online resource called “Text Dependent Analysis Sampler,” which would be available to all educators and students throughout that particular state. The purpose of a TDA is to pose questions that require students to “synthesize answers based on specific evidence within a reading passage and demonstrate their ability to interpret the meaning behind that evidence.” I’m delighted to be asked. This would be the second state to use something from the book in this way.

Passages from CAVE DETECTIVES have also been used twice before in a third state for 5th grade editions of school assessment tests. The most recent use in that capacity involved 139,000 copies in print and 4,500 copies online.

Apparently this is kind of use isn’t something you seek. They find you. One of my contacts said he wasn’t sure how they found me, my work, or this particular book. I hope “they” keep finding me in other states!

BULLETIN: By coincidence, this morning’s News-Leader features Matt Forir, the paleontologist in charge of researching Riverbluff Cave, which is the subject of CAVE DETECTIVES. Matt and a team of volunteers recently returned from Wyoming where they dug up the fossil remains of a large bull triceratops. The ancient creature, estimated by Matt to be about 67 million years old, will be reassembled here and mounted for display at the Natural History Museum. I worked on the board that helped create the museum and was on it while working on CAVE DETECTIVES. Way to go Matt.

I haven’t been checking on the status of CAVE DETECTIVES, UNRAVELING THE MYSTERY OF AN ICE AGE CAVE, since it went digital in February.

I just did and it’s holding its own,
8th in science, 32nd in archaeology, and 34th in prehistoric. Here’s the link if you’re interested.

My thanks to Marla Wuench for inviting me to visit Truman Elementary School yesterday. I had a fine time with 150 1st and 2nd grade students. I told them I’m 200 years old. Some looked stunned but didn’t challenge it. I received a wonderful book of poems from the kids in Mrs. Darnell’s First Grade Room and an enormous poster signed by dozens of kids. My thanks to all.

ANNOUNCEMENT: CAVE DETECTIVES, my nonfiction book about the ice age cave discovered in Springfield, Missouri on 9/11, has just been released as an e-book. I’m delighted to have this book available again. It became a Junior Library Guild Selection when it was released in print in 2007. The cave contains the oldest known ice age fossils discovered so far on the North American continent. I hope you’ll check it out. Here’s the B&N link: http://www.barnesandnoble.com/w/cave-detectives-david-l-harrison/1110846985?ean=9781452135533 and here’s the Amazon link: http://www.amazon.com/Cave-Detectives-Unraveling-Mystery-Ice-ebook/dp/B00I5X4UIW/ref=sr_1_1?ie=UTF8&qid=1392561575&sr=8-1&keywords=cave+detectives.

I’m still away from my office but now and then I have a chance to get online for a while. I want to remind anyone who is considering my Highlights Foundation poetry workshop this fall (September 29 – October 2) to start the process of registering. Last year the event was filled by March and I hope to see that happen again for 2014.

My special guests this year include poetry editor Rebecca Davis and Skype appearances by Jane Yolen and U.S. Children’s Poet Laureate Kenn Nesbitt. I hope to see you there.